If the fault ruptures along its length and involves other faults, it could cause a major earthquake and massive damage, with the possibility of a strong local tsunami, researchers say.

Here's a story on the front page of the Ventura County Star about the "high hazard" the city and the region face from a network of earthquake faults.

My editor at the paper gave me a go-ahead to attend a scientific conference last month, and added a pretty wonderful graphic, and made this story free to the public on line for at least a day, all of which show it matters to the paper and all are facts for which I'm grateful.

But I hope this story doesn't get a whole lot bigger.

If the fault ruptures along its length and involves other faults, it could cause a major earthquake and massive damage, with the possibility of a strong local tsunami, researchers say. The Ventura research was presented at an American Geophysical Union conference last month in San Francisco.

“We have a multiplicity of concerns about Ventura,” said Thomas Jordan, who directs the USC-based center.

“The Ventura fault that runs right through downtown is a very active structure, and Ventura County is an area with many big thrust faults, including San Cayetano, Red Mountain and Pitas Point.

“If you have a 7.3 out in the desert where there’s nothing but a small Marine base, it’s no big deal. But if you put a magnitude 6.3 in the middle of a city, there’s hell to pay, and the fault in downtown Ventura is capable of a lot more than that.”

Using holes drilled about 75 feet deep in a corner of the Ventura College campus, as well as sounding methods at various sites along Day Road in Ventura, researchers found evidence in the layers of stratification of a large earthquake 770 to 1,020 years ago.

[a pic of the slope from the paper]

Note: Researcher Judith Hubbard, who graduated from Harvard in 2012, gave me a couple of charts that illustrate literally at a deeper level what is going on, and encouraged me to use them, so here are two profiles that show how deep the Ventura fault was thought to be in 1982 and how deep we think it goes today.

You can barely see a crack in the top graph: in the bottom it links with a whole floor of faults.

To continue with the story:

The earthquake that made this slope was anything but gentle, found researchers James Dolan, a USC professor of geology, and Lee Mcauliffe, a graduate student working with Dolan.

“You’re talking about moving a whole chunk of the Earth’s crust in a few seconds,” Dolan said. “We’re talking 6 meters of uplift and 10 meters of displacement. That’s very, very energetic. You simply don’t see that in earthquakes of less than 7.5” magnitude.

Craig Nicholson, a geophysicist at UC Santa Barbara, pointed out that the 1994 Northridge quake was 6.7 in magnitude. A 7.5 would be about 30 times as strong as the Northridge quake, which caused about $40 billion in damage, according to Nicholson.

Both have deepened geologists’ understanding of the Ventura fault system.

“Previously, there had been some debate as to whether the Ventura fault was capable of generating large earthquakes or whether it was a surface feature and not much of a factor,” Dolan said. “What this study and other studies … are showing is that these are large displacement events. That means many meters of slip, which indicates that this fault is capable of an earthquake well in excess of a 7” magnitude.

Hubbard spent four months analyzing seismic profiles of the Ventura region provided by the oil industry. The profiles, based on sound waves sent miles below the surface by explosions, provide records of stratification in rock.

Scientists believe that the longer and deeper a fault runs, the more risk it poses. Previous study of the Ventura fault estimated it extended about 1,000 feet below the surface. Hubbard’s results show it extends at least 7,500 feet below.

This means it likely connects to numerous other faults in the region, extending north toward Santa Barbara along the Red Mountain fault, out to sea along the Pitas Point fault, eastward along the San Cayetano fault and southward along the Lion fault.

Note: Hubbard stressed that maps that show faults at the surface, which don't appear to connect, are misleading in the Ventura basin, because we don't see what's happening below. Here's a graph of hers that uses oil rigs to give a sense of the Ventura fault's depth.

And here's one that maps various basin faults at depth, showing how closely they lie.

Sorry! Perhaps the edtor was right. Back to the story:

Hubbard's study estimated that terraces along Highway 101 north of Ventura, which thousands of years ago were beneath the sea, were raised by 16 to 32 feet per earthquake.

“This much uplift would require large earthquakes (magnitude 7.7 to 8.1) involving the entire Ventura/Pitas Point system, and possibly more structures such as the San Cayetano fault,” Hubbard wrote. “Due to the local geography and geology, such events would be associated with significant ground shaking amplification and strong regional tsunamis.”

Rockwell has documented four earthquakes along the Ventura/Pitas Point faults in the past 7,000 years, most recently about 1,000 years ago. Rockwell estimates earthquakes strike there every 400 to 2,800 years, but the long intervals are not entirely good news. It suggests a fault rupture will occur over a greater length and may involve more than one fault.

Ventura County has few large earthquakes in its historical record. A well-documented earthquake in 1812 damaged several missions along the Central Coast, including the San Buenaventura Mission. A second earthquake later that year caused a tsunami that struck Goleta, Santa Barbara and Ventura, according to historical records compiled in the late 1970s by the California Division of Mines and Geology.

Using sonar and seismic instrumentation, Rockwell has been working with graduate student Gulsen Ucarkus, a researcher at the Scripps Institute of Oceanography, on an undersea survey of the Ventura-Pitas Point fault system as it moves offshore. He also is working with Steve Ward, a professor at UC Santa Cruz, on this fault’s potential to cause tsunamis. Also in the works is a model of the potential for ground shaking.

“If you look at the national hazard maps … you will see an extremely high hazard in the Ventura basin,” Lucile Jones, a nationally recognized seismologist with the U.S. Geological Survey, said at last month’s conference. “It’s a confluence of faults that are moving very rapidly, and there’s probably a lot of buried faults that we can’t see, too, in such a fast-deforming basin.

“You’re one of the hot spots in California.”

And here's a link to the paper's excellent interactive graphic — with comments apparently from Lucy Jones, independent of my reporting — which the paper kindly encouraged sharing. 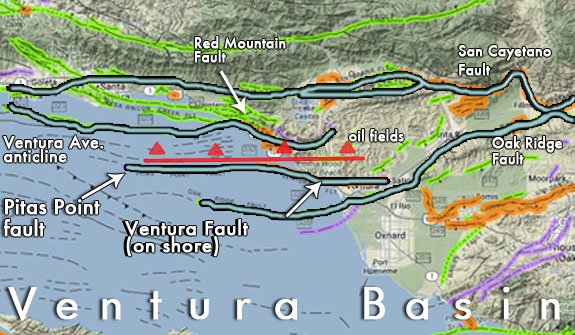