This blog mostly focuses on questions of climate, wilderness, drama and literature. Inevitably politics sneaks into the discussion, but for the most part against my wishes — my attitude as a reporter is that my opinion is no better than yours, especially on topics with which I have no personal experience. So why talk about it?

But then along comes a fresh horror from this horrific administration, a horror so profound that even Mr. Trump doesn’t want to admit it is (or was) the policy of his administration, and last week after no less than 14 evasions, misstatements and lies (according to the Washington Post) is forced to retract it. Meanwhile, according to numerous news sources, about 2,000 kids have been separated from their parents at the border, many of them very young children, and about another 9.000 children remain in detention.

This is a moral atrocity. This wrong is being done in my name (as an American), and probably yours too, and it’s just intolerable. Myself and friends and neighbors feel compelled to do whatever we can to reverse and heal this atrocity. A friend named Rain Perry, who lost her mother at a young age, launched a website — called Every Child Returned, which depends on reputable reporting from the likes of ProPublica — to reverse it. Here I am protesting Tuesday outside a building in San Fernando belonging to a child-holding agency (though we were told that no children were in this particular center). 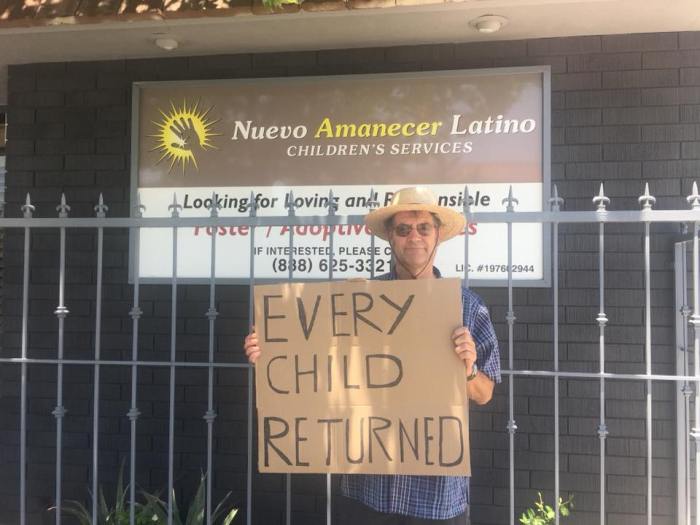 That’s just to set the context. This post is about a true story dramatized impressively by a Pulitzer Prize-winning cartoonist named Mark Fiore, working for KQED in Northern California, who drew the true story, based on KQED reporting of Nazario and Filemona.

It’s called “One Family’s Story of Separation: A Cartoon Account.” It’s appealingly drawn, which only adds to the devastating effectiveness of the facts.  Please take a look when you have a chance:

Here’s the central frame, the crux of the story. The detail that just kills me is that after being separated from his young child for two weeks, the broken father Nazario gives up his asylum claim and is due course deported back to Guatemala, but Filemona, now being held somewhere in New York, still has an asylum claim and a legal right to pursue her case…but she’s five years old! This is simply beyond belief. Tell me that you don’t believe it and I will understand, but point you to a story in The Texas Tribune stating that yes, children as young as three years old are being forced to appear in court. It’s called Immigrant Toddlers Ordered to Appear in Court Alone.