Forty-six years ago  a young fire ecologist published a paper that for the first time found a math to usefully describe the behavior of wildfires in the west, as modified by slope and wind. It’s a remarkable achievement and was, according to Wildfire Today, a team effort led by a man named Dick Rothermel.

Rothermel, Anderson, and Bill Frandsen, another physicist on the project, adapted an approach developed by an early Forest Service fire researcher, Wally Fons, which turned on the concept of conservation of energy. A fire spreads by igniting a series of little fires in the fuel ahead of it. The ignitions are driven by convection, radiation, and conduction. Even if it’s unknown which mode is operating in a given instance, the rate of heat transfer can be measured. The researchers reasoned that if they knew how much fuel was ahead of a fire, how big and how densely packed the fuel particles were, and how much moisture the fuel contained, then they could figure out how much energy would be needed to transfer enough heat to bring the fuel up to the ignition point. They could then calculate the rate of ignition that would carry the fire as it spread. The model would also have to account for the critical variables of wind speed and slope of the ground.

This week the National Weather Service and NOAA republished his seminal work, adapting a central diagram from the paper into graphical form. 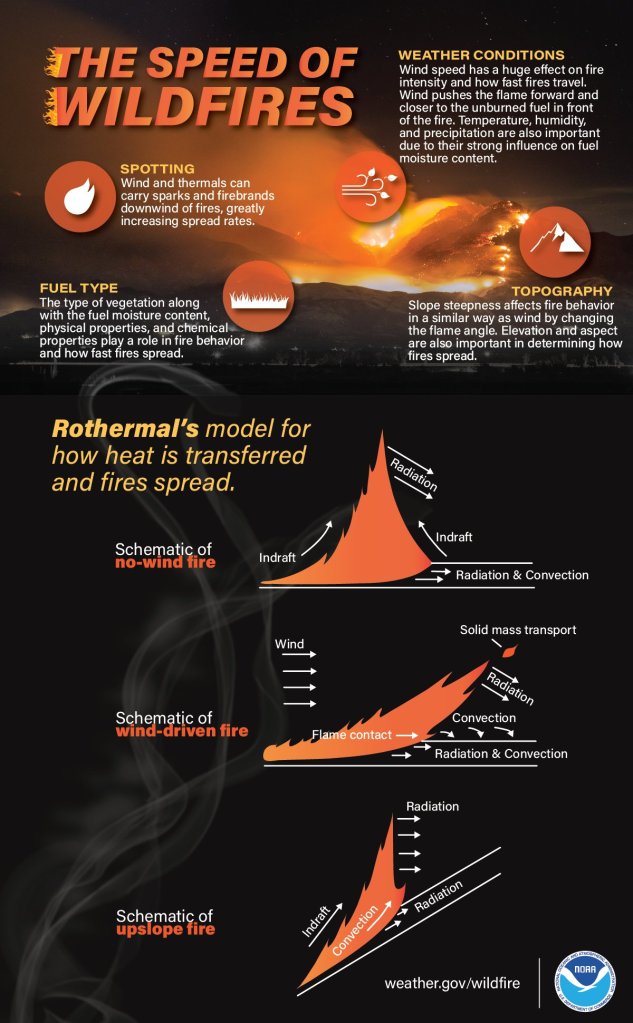 A firestorm known as the Thomas Fire visited us in Upper Ojai and destroyed many of our neighbors’ property, but we were fortunate, being on flat ground and protected by a tall, thick, and strong canopy of large live oaks.

But all around us the firestorm burned chaparral and trees on thousands of slopes to the ground. Over 200,000 acres in extent into the black. Just as the modeling above implies, the fires burn hottest when driven up a slope by a wind. On mountain slopes in every direction, every living leaf burned.

Here’s a picture (if I can find it) from a popular and accomplished adventure photographer who on Instagram is known as Alphawanderlust. I think this captures the feeling of the aftermath almost too enticingly.

Interestingly Alphawanderlust, who appears to earn his countless great and popular shots with bold adventuring, as well as photographic skills, admits this may not be a popular shot. May not get him a lot of heart-shaped “likes.” It’s not fun or cool exactly, as his pictures usually are, but he nonetheless felt compelled to try and capture the starkness that came after the fire.

“We went down to Los Pedros [Padres] national forest last month to camp up in the mountains and as we drove through the mountains, it felt like it was something out of a post-apocalyptic movie. Everything was scorched, no one to be seen or heard for miles however, there was life to be found. Vegetation was sprouting from the rains but the trees and large bushes were goners. After setting up camp, the sun was setting and the fog started to roll in. It was a beautiful disaster.”

It’s true, but it’s also true it’s heart-sinking. This disaster has made us think twice about beauty itself — even if the picture went on to earn over 1000 likes.