The Ojai Valley News encouraged me while at a scientific conference in San Francisco last December to pursue a story about rainfall variability in Ojai and Southern California: here it begins.

“Last month was one of the driest Februaries ever in the recorded history of Southern California, according to the National Weather Service, with one-tenth of one inch of rain recorded for the entire month at the weather station in Ojai.”

Because all but that first sentence is behind a paywall that will exclude most of my readers, let me take the liberty of posting this story — an important one I think — and images in this post. Here it begins:

Last month was one of the driest Februaries ever in the recorded history of Southern California, according to the National Weather Service, with one-tenth of one inch of rain recorded for the entire month at the weather station in Ojai.

A vast ridge of high pressure across the breadth of the northern Pacific last month blocked storms systems from the north from reaching California. For the first time since 1864, no rain in February at all was recorded in the city of San Francisco.

Because February is usually the wettest time of the year, that means chances of locations such as Ojai in Southern California recording an average amount of rain this year has fallen to about 10%, according to projections compiled by hydrologist Mike Dettinger of UC San Diego and the Scripps Institute of Oceanography.

The plunge from a rainy December to a dry January, followed by a parched February, fits a pattern of extreme highs and lows that has been developing over the past sixty years,  according to research into tree ring records from the University of Arizona that included tree ring research from the Pine Mountain area north of Ojai.

“These reconstructions [of annual rainfall using tree ring records] show that the recent increase in precipitation variability is unprecedented over the past 430 years,” wrote hydrologist Diana Zamora-Reyes in the abstract for her work presented at a scientific conference in December in San Francisco.

“Water resources managers will need to incorporate this increased volatility into their planning for public and agricultural water supply, while being aware of the higher risks for wildfires and floods,” she added. 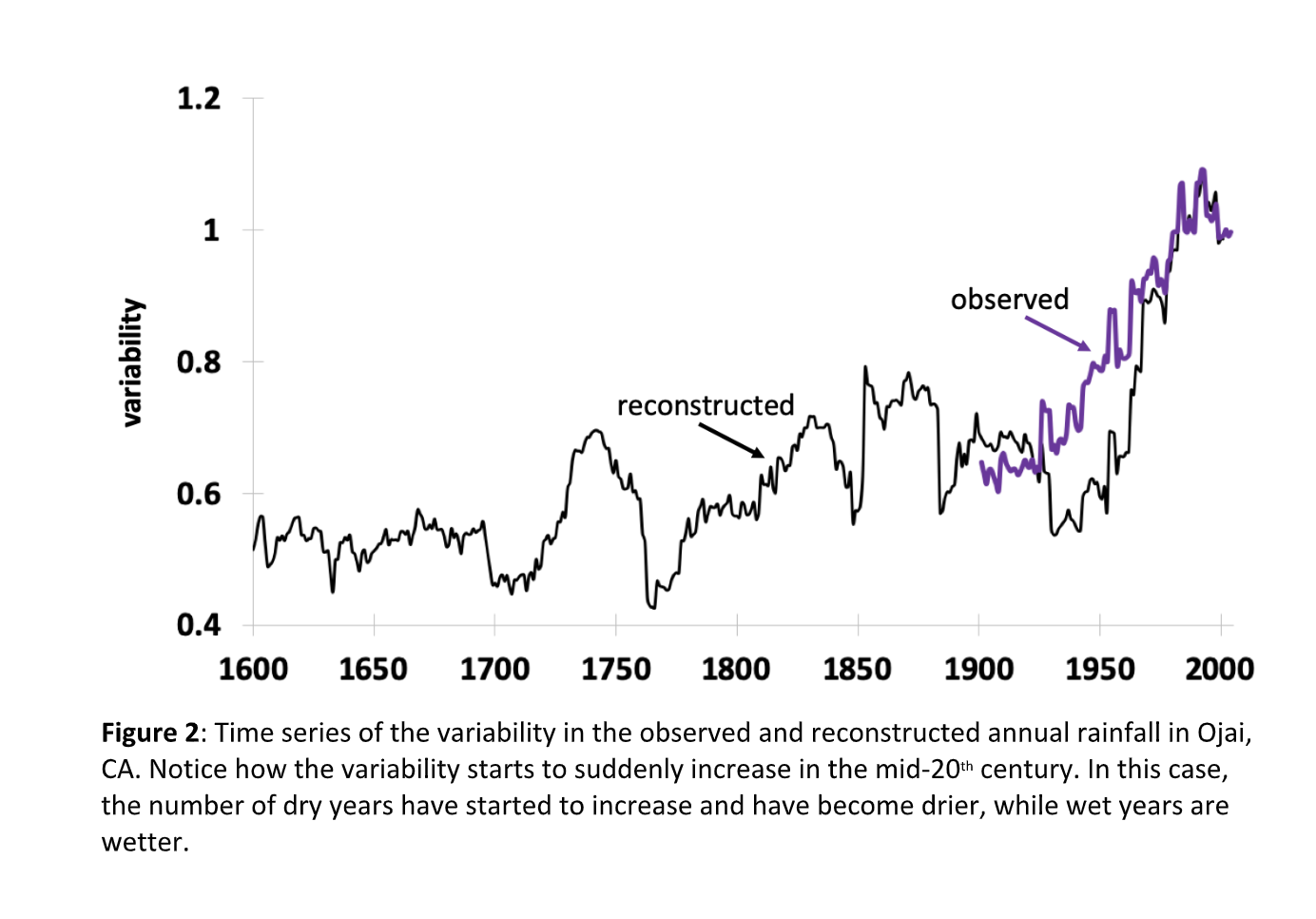 This research did not surprise water managers at Casitas Municipal Water District, given the severe drought suffered in the Ojai watershed from 2012-2016. “‘We had a major spike in drought this decade,” said General Manager Michael Flood. “Basically we did not have a whole lot of rainfall until this last year.”

Zamora-Reyes’ research incorporated other research from the University of Arizona’s well-known Laboratory of Tree-Ring Research, which was funded in part by the California Department of Water Resources (DWR). Dave Meko, another researcher at the lab, said that big cone Douglas Firs in the Mt Pinos region provide especially good records of droughts dating back to the 1580’s.

“In Southern California, a number of the reconstructions indicate that the 2012-2016 drought was the worst 5-year drought in the past six centuries, as measured by the percent of average annual precipitation or streamflow,” he wrote in a study prepared for the DWR at the end of 2017.

Scott Holder, a hydrologist with the Ventura County Watershed Protection District, pointed out that his district’s own records show the same volatility in precipitation in recent decades.

Holder said that climate change is believed to play a role in the swing towards extremes in precipitation in Southern and Central California.

“There’s no conclusive evidence, but there’s a strong indication that climate change is at least somewhat responsible,” he said, adding that the amount of rainfall in Ojai to date this water year — about eight inches — says little about the total amount of rain to expect this year.

That point was echoed by members of the Board of Directors at Casitas.

“I was born in the Oxnard plain hundreds of years ago and if I’ve learned anything it’s that you can’t predict the rest of the year based on the rain you’ve received by January,” said Angelo Spandrio. “I don’t think that what we’ve seen so far is any indicator. We could have beautiful spring rains and we could get nothing. I’ve seen both.”

Michael Flood, the general manager, said that the district is preparing a new comprehensive water resources plan, incorporating the 2012-2016 drought, to be released probably at the end of this quarter. He said that the plan recognizes climate change as a factor to be incorporated in planning.

Russ Baggerly, who serves on the board of directors at Casitas and at the Ojai Basin Groundwater Management Agency, stressed the uncertainty water managers face.

“I’ve been to many seminars where scientists were talking about climate change,” he said. “The question is how things are going to change for us, and the answer is: nobody knows. The ultimate statement I took away from these presentations is that “Stationarity Is Dead,” meaning that we can’t rely on the weather repeating itself in some sort of past predictable fashion. Nobody knows what climate change will bring us. Some say that the rainy periods will be stronger and more violent, and some say they will be followed by droughts and wildfires that plague us forever.”

Daniel Swain, a leading research climatologist, said that climate modeling shows an increasing tendency towards divergent extremes of both wet and dry in Southern California. Though the total amount of rainfall is not expected to change substantially, it is expected to come increasingly often in bursts of hard rain.

“We’re living in the future now,” he said. “In California we do expect to see more dry days, and more dry days even in the wet season. We also have a projected increase in the wettest of wet days, but right now we’re seeing increased aridification during dry periods, and a later onset of the rainy season.”