Have been struggling a bit with climate “overwhelm” — the volume of bad news is drowning out my efforts to keep up and post, even my own thoughts. I sympathize with a JPL/NASA scientist and publicist named Laura Faye Tenenbaum:

I try to make a difference, to keep encouraging myself, to lift myself out of despair. We’re supposed to keep our noses to the do-something-meaningful-with-your-life grindstone and keep chugging endlessly uphill, just like The Little Engine That Could, while repeating some mindless positive slogans of encouragement to keep our heads up.

I try to find a way to cope with these enormous problems without turning away, without downing a pint of ice cream, without watching the stupidest reality TV show I can find. For to be so disconnected from the world as to be capable of polluting it, is to be disconnected from life. And connection is the one thing I refuse to let go of.

True, maybe you really should crawl under your desk and your little engine should pull over to the side of the road for a break. But you’re here, just like I am, pushing through because it’s somehow better to stay connected even if it hurts.

Doesn’t help that the public sees the reality, but shrugs off its seriousness. From an AP poll just out today:

Most Americans know the climate is changing, but they say they are just not that worried about it, according to a new poll by The Associated Press–NORC Center for Public Affairs Research. And that is keeping the American public from demanding and getting the changes that are necessary to prevent global warming from reaching a crisis, according to climate and social scientists.

As top-level international negotiations to try to limit greenhouse gas emissions start later this month in Paris, the AP-NORC poll taken in mid-October shows about two out of three Americans accept global warming and the vast majority of those say human activities are at least part of the cause.

However, fewer than one in four Americans are extremely or very worried about it, according the poll of 1,058 people. About one out of three Americans are moderately worried and the highest percentage of those polled — 38 percent — were not too worried or not at all worried.

Despite high profile preaching by Pope Francis, only 36 percent of Americans see global warming as a moral issue and only a quarter of those asked see it as a fairness issue, according to the poll which has a margin of error of plus or minus 3.7 percentage points.

Friends and hard-working activists keep me from despair — but I have my moments. 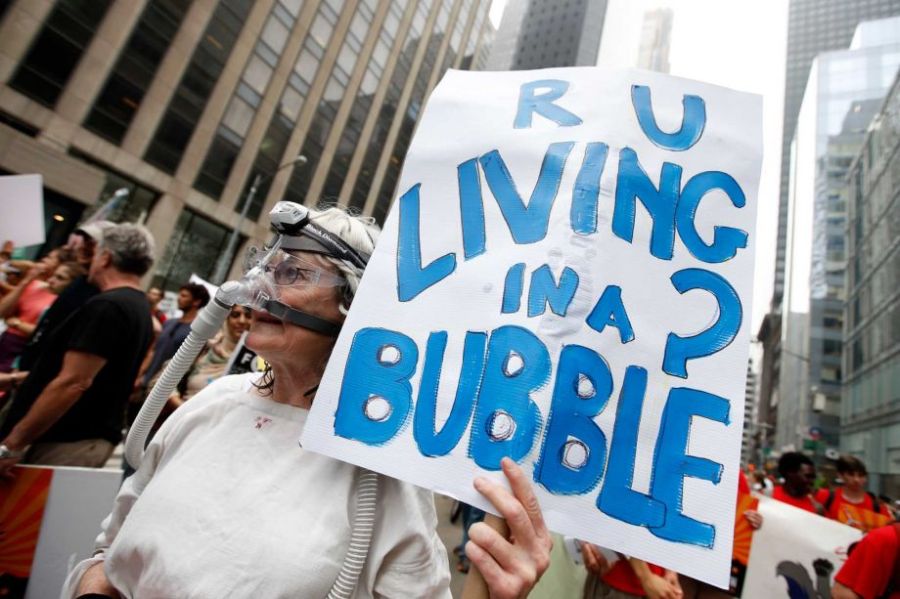 Are we all living in a bubble?